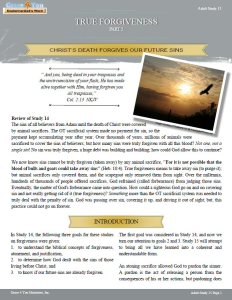 An atoning sacrifice allowed God to pardon the sinner. A pardon is the act of releasing a person from the consequences of his or her actions, but pardoning does not clear the offender of guilt. The pardoned Old Testament believers were still guilty, and the penalty for their sin had to be paid sometime. Sin cannot just be overlooked or forgiven because the righteousness and holiness of God demanded it be dealt with in a righteous and just manner; that manner, according to God, is by death/blood, “…and without shedding of blood there is no remission” (Heb. 9:22).

At first glance, there would seem to be four options for taking away sin (paying the debt):

1. An animal blood sacrifice. Not acceptable, according to Heb. 10:4

2. Each person could pay for her or his own sins. This is exactly what happens to the non-believers. They can never pay for their sins, so they suffer the consequences in Hell.

3. One person could pay for another. The payer would have to be sinless, otherwise the payer must pay for his or her own sins. Since all have sinned, this solution will not work.

4. Christ the perfect Lamb could pay for us all. He certainly was perfect, accepted by God, and a willing substitute. Since He is the Son of God, He can pay for everyone.

Options 1 and 3 will not work. Option 2 will be chosen by most people; they will end up eternally separated from God as a result. Option 4, God’s way, is the only way of forgiveness!