Study 20: Spiritual Gifts & Fruit – The Early Church: The Identity, Purpose, and Destiny of the Gifts 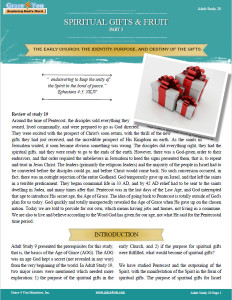 “ endeavoring to keep the unity of the Spirit in the bond of peace.” Ephesians 4:3 NKJV

Adult Study 9 presented the prerequisites for this study, that is, the basics of the Age of Grace (AOG). The AOG was an age God kept a secret (not revealed in any way) from the very beginning of the world. In Adult Study 19, two major issues were mentioned which needed more exploration: 1) the purpose of the spiritual gifts in the early Church, and 2) if the purpose for spiritual gifts were fulfilled, what would become of spiritual gifts?

We have studied Pentecost and the outpouring of the Spirit, with the manifestation of the Spirit in the form of spiritual gifts. The purpose of spiritual gifts for Israel was to act as signs, and to assist in the ministry. However, the Jewish people would not heed the signs. After God exhausted all efforts to get the Jewish people to accept Him, it was necessary to set Israel aside and begin the new Age of Grace. Now, we will study the spiritual gifts in the early Church: 1) what gifts were involved, 2) what was their purpose, and 3) what happened to them.

What Were the Church’s Gifts

We will jump into this study very rapidly because there is so much information to cover. The three major passages referring to the various spiritual gifts in the early Church are found in Romans, 1 Corinthians, and Ephesians. There is no reason to think these passages provide lists that are all inclusive (showing every gift that ever existed); the lists show examples of typical gifts. The mere fact the lists refer to the same general time period, yet are largely different, implies they were intended to give us examples of what the gifts were, not to suggest a complete listing of all the gifts. Please study the table below.

First, notice each list is quite different, with prophecy/prophets being the only gift on all four lists. Second, notice that the Ephesians list is not of gifts, per se, but the individuals so gifted; this is also seen in some of the gifts shown in 1 Corinthians 12:28. Third, notice that 1 Corinthians is divided into two major groups, the first group is shown in three colors, and the second group in black.

The three colors for the first group of 1 Corinthians 12, are based upon three distinct kinds of gifts. The three kinds of gifts are noted in the Greek text, which, in essence, says some people received the same kind of gift, either wisdom or knowledge (red). Then, other people received a different kind of gift, either: faith, healing, miracles, prophecy or discernment (blue). Finally, other people received a different kind of gift, either tongues or the interpretation of tongues (green). This threefold division by kinds will be seen to be important later. As for the three kinds of gifts, you can see how wisdom and knowledge are closely related (a kind); and that those two gifts are complementary, working together to deal with supernatural wisdom and understanding. Equally easy to grasp are tongues and the interpretation of tongues, obviously related gifts of a kind, both working together as a team. The middle kind is not as easy to identify as being of one kind; but, we can be sure God had a reason for grouping them as He did.

Your Thoughts: Who knew the various gifts were divided into three different kinds? Please take note of the kinds, for we will see Paul refers to them again.