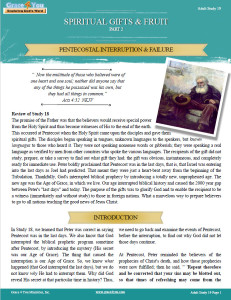 Now the multitude of those who believed were of one heart and one soul; neither did anyone say that any of the things he possessed was his own, but they had all things in common.” Acts 4:32 NKJV

In Study 18, we learned that Peter was correct in saying Pentecost was in the last days. We also know that God interrupted the biblical prophetic program sometime after Pentecost, by introducing the mystery (His secret was our Age of Grace). The thing that caused the interruption is our Age of Grace. So, we know what happened (that God interrupted the last days), but we do not know why He had to interrupt them. Why did God reveal His secret at that particular time in history? Thus, we need to go back and examine the events of Pentecost, before the interruption, to find out why God did not let those days continue.

At Pentecost, Peter reminded the believers of the prophecies of Christ’s death, and how those prophecies were now fulfilled; then he said, ” ‘Repent therefore and be converted that your sins may be blotted out, so that times of refreshing may come from the presence of the Lord, and that He may send Jesus Christ, who was preached to you before, whom heaven must receive until the times of restoration of all things, which God has spoken by the mouth of all His holy prophets since the world began’ “ (Acts 3:19-21). Peter told them many times of the need to repent and be converted; if they did, the desired and longed for times of refreshing and restoration would take place. The times of refreshing refers to the Messiah and His Kingdom, and the restoration refers to much the same thing, that is, the restoring of Israel to the Promised Land with the Son ruling in His Kingdom upon earth. Indeed, the Kingdom is what all the believers had wanted for a thousand or so years, what incredible, fantastic news. The establishment of God’s Kingdom on earth, and the Messiah ruling, were the ultimate dream for Israel. The end was in sight, and Pentecost was the start of the last days leading to that end. Yes, there would be the Tribulation and the Day of the Lord before the Kingdom, but they were the end events heralding the glorious Kingdom to come. Now, we need to know why, all of a sudden, all that was happening came to a screeching halt, resulting in the times of refreshing and restoration not occurring. Why did God have to introduce a new age at that time?

Studying what really happened shortly after Pentecost provides great perspective on spiritual gifts. Right after Pentecost, the disciples lived in a religious commune, that is, they had all things in common. “Now the
multitude of those who believed were of one heart and one soul; neither did any one say that any of the things he possessed was his own, but they had all things in common … Nor was there anyone among them who lacked; for all who were possessors of lands or houses sold them, and brought the proceeds of the things that were sold, and laid them at the apostles’ feet; and they distributed to each as anyone has need” (Acts 4:32-35). The saints in Jerusalem sold all they had (houses, land, etc.) and obviously gave up their jobs. They knew they “could not take their earthly possessions with them,” so they sold everything and were prepared to go wherever God sent them. The excitement of His return, the thrill of the empowerment they had just received, and the overwhelming prospect of His Kingdom on earth, were more than we can even imagine. It is a phenomenal concept to think of a group of Christians living in one accord, in total unity, no one lacking his or her needs, no selfishness, and with one heart and one soul (Acts 1:14, 21). Considering all the disagreements, needs, selfishness, and lack of unity within the Church today, living in the Pentecostal manner is often thought to be a good model for today.

Discuss: This all sounds very exciting, should we try to recapture the glory of those days?

After the Saints in Jerusalem received the Holy Spirit and His spiritual gifts, they waited, waited longer, and then waited some more, but they did not leave and go into all the world. They were anticipating being sent-out by God; when sent, they would be the channel of blessing (those people God would use to accomplish His purpose) taking the Good News of Jesus into the rest of the world. However, something odd was happening, something was preventing them from leaving Jerusalem. There were some persecutions that caused some to go out as far as Damascus, but that was not the fulfillment of what was to occur as a result of Pentecost. The disciples did everything right, they received the spiritual gifts (to use as a sign to unbelievers in Israel), they were empowered by the Holy Spirit, and they were ready to go. However, there was a God-given order, a systematic way, in which the entire outreach was to proceed. They were told, “…you shall be witnesses to Me in Jerusalem, and in all Judea and Samaria, and to the end of the earth” (Acts 1:8b). They were given the order for their missionary work, that is, to start in Jerusalem, then moving outward to Judea, then Samaria, and ultimately the uttermost parts of the earth. So, once Jerusalem was evangelized and the people converted, then they could move outward to Judea, and so on.