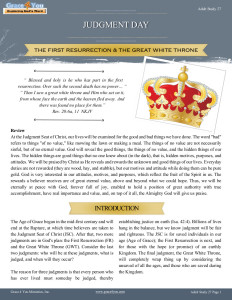 “Blessed and holy is he who has part in the first resurrection. Over such the second death has no power… “
“Then I saw a great white throne and Him who sat on it, from whose face the earth and the heaven fled away. And there was found no place for them.” Rev. 20:6a, 11 NKJV

The Age of Grace began in the mid-first century and will end at the Rapture, at which time believers are taken to the Judgment Seat of Christ (JSC). After that, two more judgments are in God’s plan: the First Resurrection (FR) and the Great White Throne (GWT). Consider the last two judgments: who will be at these judgments, what is judged, and when will they occur?

The reason for three judgments is that every person who has ever lived must someday be judged, thereby establishing justice on earth (Isa. 42:4). Billions of lives hang in the balance, but we know judgment will be fair and righteous. The JSC is for saved individuals in our age (Age of Grace); the First Resurrection is next, and for those with the hope (or promise) of an earthly Kingdom. The final judgment, the Great White Throne, will completely wrap thing up by considering the unsaved of all the ages, and those who are saved during the Kingdom.

The First Resurrection
In the chart at the end of this section, green represents the Age of Grace, which has been discussed. The blue represents the First Resurrection (FR) and those involved. The FR was promised by God long ago, that is, raising the dead believers of all previous ages so they can enter the Kingdom (Matt. 25:34). Thus, “first” is a reference to this resurrection being mentioned first in the Bible, even though the Rapture occurs first in actual time. The FR does not result in people going directly to Heaven, but into the earthly Kingdom (their specific hope). Many of those who enter the Kingdom will be those we have read about in the Bible. The FR will also include believers who are alive at that time, and many alive unbelievers; we will explain this as we proceed. Alive people are not resurrected, but brought into the Kingdom.

“So Jesus said to them, ‘Assuredly I say unto you, that in the regeneration, when the Son of Man sits on the throne of His glory, you who have followed me will also sit on twelve thrones, judging the twelve tribes of Israel'” (Matt. 19:28). Though not specifically stated, this is the First Resurrection. The FR occurs in the regeneration, that is, when Christ sits on the throne of His glory. He sits on His throne of His glory in the thousand-year Kingdom. This establishes the fact the FR will occur when He returns to sit on His throne—His Second Coming. At that time, He will destroy His enemies and establish the earthly Kingdom. The first coming was at His birth, and the Second Coming at the close of the Day of the Lord (see chart below). The Rapture does not enter into this count for two reasons: 1) He intentionally does not come to the earth at the Rapture, but meets us in the air; and 2) the Rapture is part of the mystery, and was not revealed to the Gospel writers (or in Revelation). At the FR, the twelve Apostles will be sitting on twelve thrones, judging the twelve tribes of Israel. So, some degree of judgment is made, certainly to determine who gets into the kingdom; it is not known if this judgment also considers rewards. There is no fear or shame for believers in the FR (Isa. 54:4).

“‘When the Son of Man comes in His glory, and all the holy angels with Him, then He will sit on the throne of His glory. All the nations will be gathered before Him, and He will separate them one from another, as a shepherd divides his sheep from the goats. And He will set the sheep on His right hand, but the goats on the left. Then the King will say to those on His right hand, ‘Come, you blessed of My Father, inherit the kingdom prepared for you from the foundation of the world'” (Matt. 25:31-34). While on the throne of His glory, all nations will be gathered before Him. Remember, this is not our judgment; we will be in Heaven when this takes place. God has made it clear that our hope/promise is of a heavenly home (Phil.3:20; Eph. 2:6; 2 Cor. 5:8; 1 Thes. 4:17). The FR is seven-plus years after the Rapture.1 This judgment is for anyone with an earthly Kingdom hope, which we will assume includes all those living before and after the Age of Grace (see chart). Believers like Ezekiel, David, Ruth, Moses, Abraham, Adam, and Eve will be in the FR. The saved are raised from the dead for this judgment; they will be given new, glorified bodies. The unsaved dead await a future judgment. The believers that are alive at the FR also take part, but the nature of their bodies is uncertain. Will they have new, glorified bodies, or go into the Kingdom with natural bodies? Those resurrected from the dead get glorified bodies, but it is not clear what happens to those who are alive. If they go into the Kingdom with natural bodies, they will die during the Kingdom, which we know can happen (Isa. 65:20), and receive glorified bodies later.

The difficult part of the verses above is to know if “nations” means actual nations or individuals within the nations. We know that God has promised to bless them that bless Israel, and curse them that curse Israel (Gen. 12:1-3). It seems the nations will be actual nations, and Christ will judge how nations, in official national policies, treated Israel. If a nation was a supporter, an ally of Israel, that will be a sheep nation and allowed to enter the Kingdom. The determination of whether an ally or foe may be based primarily on historical facts, since when Christ comes to defend Israel, there is no one to help; He has to do it alone (Isa. 63:3). God has judged nations in the past (Babylon, Persia, Greece, and Rome), without affecting the personal salvation of the individuals within that nation. There is no resurrection of the dead in the sheep nations; only those alive at the time of this judgment will enter the Kingdom. Those within the sheep nations can be saved or unsaved; the unsaved will go in with mortal bodies and die a normal death. The goat nations, those that hated Israel and were not kind to her, will be sent “into the everlasting fire prepared for the devil and his angels” (Matt 25:41).2 However, the alive, saved, individuals within the goat nations will be brought into the Kingdom. Apparently, in the Kingdom, some will have glorified bodies and some will have regular human bodies.3 This may not be a weird as it sounds because Christ will eat and drink in the Kingdom with a resurrected body; so, the new body has some similarities to that of the old body (Matt. 26:19).

Matthew 24:31 reads, “‘And He will send His angels with a great sound of a trumpet, and they will gather together His elect from the four winds, from one end of heaven to the other.'” In the context of Matthew, the gathering of the elect refers to the First Resurrection, which, as the Rapture, will occur at the sound of a trumpet. This trumpet sound will be heard by everyone on earth; it is loud, clear, and people will know what it means (Isa.18:3). Contrarily, the trumpet call for the Rapture seems to be heard only in Heaven, the heavenly gathering of believers of our Age. Not only will everyone on earth hear the trumpet for the First Resurrection, but everyone will see the Son of Man coming (Matt. 24:30). For the First Resurrection, the dead believers are resurrected and the alive believers are gathered by His angels from around the entire world; they all remain on the earth for the Kingdom.

An interesting thing occurs at the First Resurrection: the good (believers) are gathered and the bad (unbelievers) are taken away. “‘Then two men will be in the field: one will be taken and the other left. Two women will be grinding at the mill: one will be taken and the other left'” (Matt. 24:40-41). This does not describe the Rapture, where the good are taken away; here the ones taken are the unbelievers (bad). “‘But as the days of Noah were, so also will the coming of the Son on Man be … and [they] did not know until the flood came and took them all away, so also will the coming of the Son of Man be'” (Matt. 24:37-39, brackets added). In Noah’s day, the bad were taken by the flood, and the same thing occurs here; the bad are taken out of this world. The bad are taken to the same place as the goat nations—Hades. Many of Christ’s parables (Matt. 13:29-30, 40-43, 47-50) teach the bad will be taken away and the good will remain so they can enter the Kingdom.

“And I saw thrones, and they sat on them, and judgment was committed to them. Then I saw the souls of those who had been beheaded for their witness to Jesus and for the word of God, who had not worshiped the beast or his image, and had not received his mark on their foreheads or on their hands. And they lived and reigned with Christ for a thousand years. But the rest of the dead did not live again until the thousand years were finished. This is the first resurrection. Blessed and holy is he who has part in the first resurrection. Over such the second death has no power, but they shall be priests of God and of Christ, and shall reign with Him a thousand years” (Rev. 20:4-6). These verses clearly teach two judgments. The First Resurrection is designed to resurrect the Kingdom believers of past ages (those who were promised an earthly Kingdom and believed God). The believers of old are resurrected, given glorified bodies, and enter into the Kingdom. God gave those believers the promise of an earthly Kingdom, and for Him to be true to His word, they must be raised to be with Christ in the Kingdom (Lk. 13:28-29; Heb. 11:10). The Kingdom believers alive at the time of the First Resurrection are also taken into the Kingdom. Those taken into the Kingdom live and reign with Christ for a thousand years. The unsaved dead will not be resurrected at this time. The believers in the First Resurrection are blessed and given eternal life. The next judgment will be composed mostly of the unsaved; their fate will be eternal damnation, called the second death.

1 There are seven years of tribulation, plus the Day of the Lord, which is not one day but of unknown length.

2 Apparently they go to Hades temporarily, then into everlasting fire after the Great White Throne.